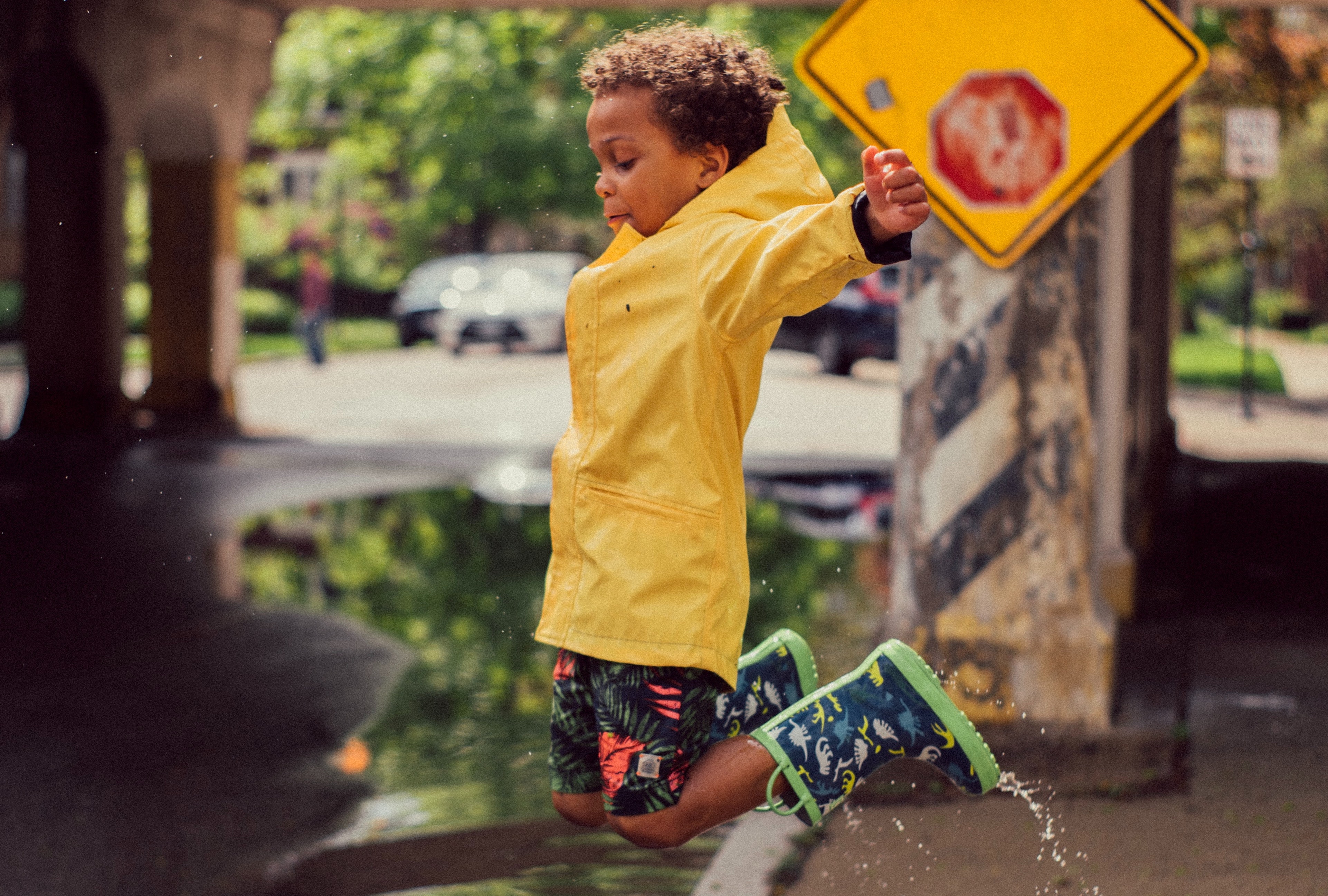 We spoke to Andrew Davenport, the creator of Teletubbies, In the Night Garden, and Moon and Me, about what it takes to create children’s entertainment that captures kids’ attention– and fuels their imagination.

Andrew Davenport is the brilliant mind behind some of television’s most successful shows for children, including the global blockbuster, Teletubbies. His work has focused on children’s natural instinct to play, and how tailored content can engage that instinct effectively.

For an adult it’s not always apparent what makes a great piece of children’s entertainment. What was it about Teletubbies that made it so captivating to young kids?

I think Teletubbies’ special impact came from its novel approach to a young pre-school audience. The design of the Teletubbies world, the characters, and the stories was very much about engaging that audience in a playful dialogue.

Adults often complained they didn’t know what was going on in the show, that it was slow and boring and that there was nothing happening. I always say that if you watch Teletubbies without a child, and you can’t see how they’re actively involved in it and constantly responding to it, then you’re only really seeing one half of a conversation. It’s hard to fully appreciate a tennis match if you can only see one player!

I deliberately constructed the stories with constant reiteration and repetition, with pauses to give space for the child to process what was going on and then give a response, before the next thing happens. Maybe that’s boring to an adult, but it's exactly how a child likes it.

"Play is a peak state of performance for kids."

Everything was done in a way that was playful. The playfulness is the most essential thing. We know that in a state of play, children are more adventurous, they use language in a more advanced way, and they retain information better. It’s like the peak state of performance for them.

In your work it’s clear you think very carefully about how to speak to and engage children. What influenced you most in identifying your approach?

Looking back, many things. The four years I spent studying speech therapy and speech science at University College London in my early twenties. Although I never followed that career, I still draw heavily on the studies and theories of child development and language acquisition I was introduced to, and I try to stay up-to-date on that.

I think my involvement in theatre taught me a real sense of audience. One thing you learn very quickly standing on a stage, is respect for your audience. The certainty that there’s absolutely no point in doing anything unless you have the full attention and engagement and interest of your audience.

There’s a lot of children’s programming out there that’s much more frenetic than Teletubbies; how do you think that engages kids differently?

It’s super-easy to get a child’s attention–to distract a child–with frenetic activity and noise on a screen. In today’s age of social media algorithms designed to distract us, we all get to experience how just gaining our attention alone is not meaningful. In fact, it’s destructive to thought. I strongly believe in meaningful exchange with the child. Mirroring the natural way we all speak to a child. When we speak to a young child we all slow down, we all use repetition, silly voices. We become playful. Then, we tell the child useful things. It’s not much of a secret formula

At the time Teletubbies launched, there was a lot of pushback in the media from adults. What do you think they missed about what was happening in the show?

Couldn’t read the Teletubbies’ intent in the way a child so easily could. Teletubbies was about the developmental processes in the first three years of life. And I guess, as adults, we might remember how we learned things at school, but not how, long before that, we learned to speak, walk, run and jump, and think.

"For a child in the first three years of life, formal learning is not useful."

How we had to grow our minds to make sense of the new experiences and sensations of the world we inhabit. This early learning is the foundation of our human identity. As adults, we can easily forget all about it, and fail to recognise its importance.

Do you think a show like Teletubbies has educational value for kids–can it be helpful in the healthy development of children?

At the time the series launched, people working in children’s television often tended to come from the world of education, so preschool programming tended to focus on preparedness for school. It was often about giving the child experience of formal learning. Teletubbies was for a younger stage of childhood, so had different aims. There’s also the definition of “educational”.

In children’s TV, “educational” all too often means content like songs about ABCs and so on. For a child in the Teletubbies age-range, ABCs have no relevance. It’s like giving a baby a bicycle. It might be useful one day, just not yet. Teletubbies speaks to the young child’s growing mind and physicality through simple, carefully structured, playful, physical, cause-and effect story events. At that age, our mind and developing physicality are closely connected, and understanding how one event leads to another is just one critical early learning that a programme like Teletubbies can support.

Presumably there are limits to the educational value of television, what do you think children’s entertainment can and can’t do for kids?

I don’t think television is especially good at teaching children in a formal way. To try to use it like that is to criminally underuse it as a medium. And plenty of studies show that screens can’t replace human interaction when it comes to essential stuff like learning language. But good screen content can contribute some really important things. One is modelling.

The preschool years are when we’re laying down our relationship expectations, which stay with us the rest of our lives. And you can model those. You can model, good, healthy, bonded, loving relationships, in a story with characters. So important. You can model characters who can be completely different, come from different places, can be interested in different things, but come together and love and support each other. Whether it’s shown as a family group, a group of friends, that’s really vital. That’s why the Teletubbies ‘big hug’ was so important. And story itself has huge value for learning. We’ve used it that way since we started out as humans. Story exercises the mind. A well designed and developmentally appropriate story exercises memory, attention, concentration, recall, deduction, logic, real developing skills.

Story does that really well and television does story really well. It’s all about the possibilities that television, or other screen forms, give you. This vast palette of tools you can use to engage and tell the story. All those possibilities of time and place, physical events, change, movement, gesture, pops, tinkles, birdsong, emotions, music. It’s a wonderful thing, and also a wonderful medium simply because it’s so ubiquitous. It can deliver the benefits to children everywhere. To those children who might not have access to appropriate stories, to playful environments or to happy, functional relationships.

The idea of stories ‘exercising the mind’ is a fascinating one; is that an idea that you’ve had for a while?

I was so excited a few years ago to come across a book from 1794, apparently the very first piece of children’s literature. Back in the 18th century, the idea of a book specifically for children hadn’t been heard of before, so like any piece of new media, it had to explain itself and justify its existence. So, in the introduction, it said it intended to give ‘unfatiguing exercise of mind’. I just love that phrase, and I’ve never found a better description of what any good children’s content should provide.

"Stories are an exercise of the mind."

What opportunities and threats do you think the internet now offers for the world of children’s entertainment?

I suppose the greatest opportunity is that there’s so much there, which is also the greatest threat! So the internet has allowed children and parents to access more, and have more stuff to play with, whether it be music or imagery or stories or the experiences of other people and other children from around the world.

There are lots and lots of positive things that can come from just understanding how big the world is, how different everything is, all of that is positive. But obviously, there are issues with how you identify good content from amongst the trash, and how you can ring-fence that good content and make sure the child accessing it isn’t then wandering off into something less appropriate, or even damaging. That’s why it’s so important for us creators to keep on experimenting and exploring, playing around with the incredible array of media around us for the best benefit of the youngest minds.