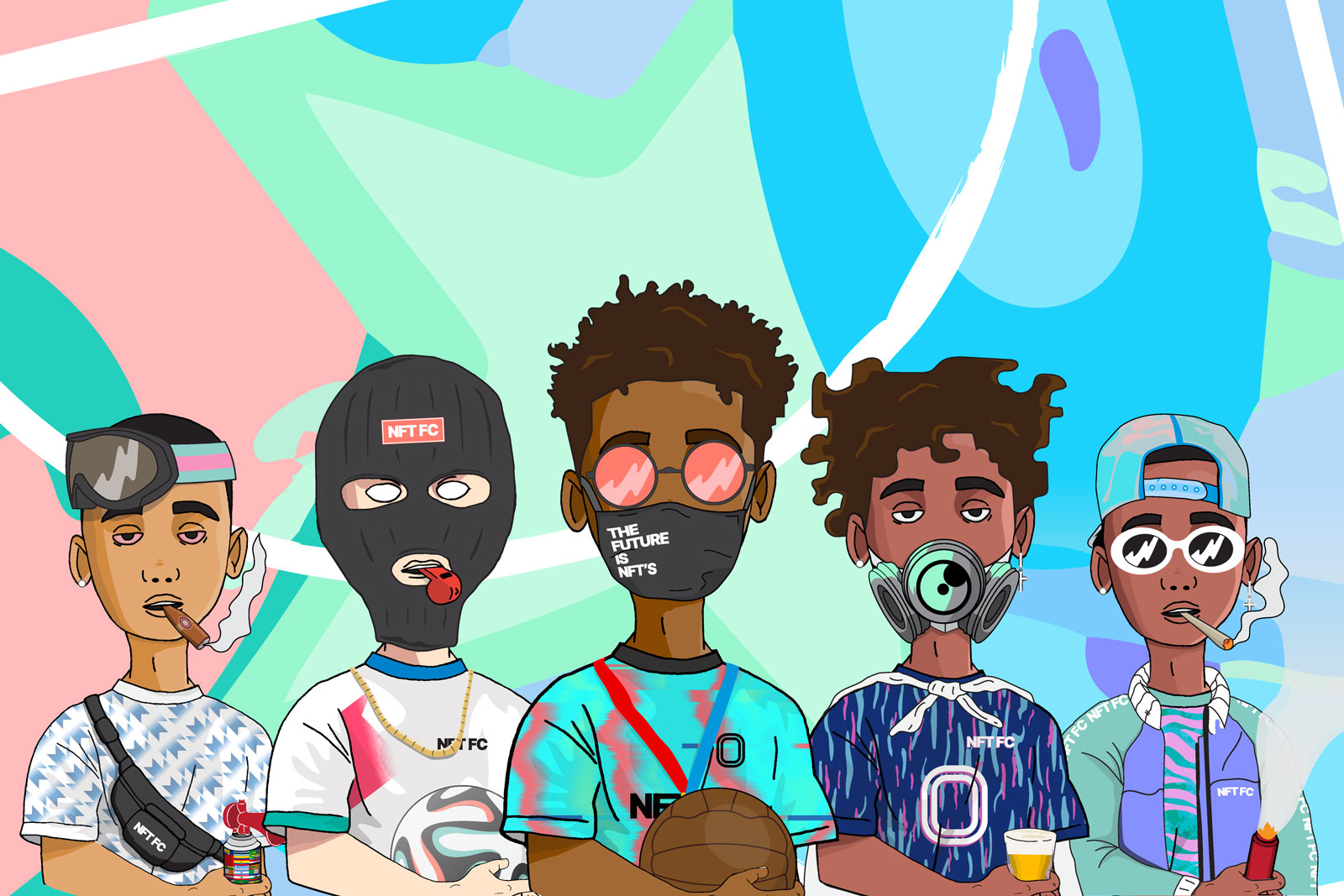 We spoke to Finley Hayhurst about how Web3 is taking the power away from the football establishment and putting it into the hands of fans.

Finley Hayhurst is a former professional football player and founder of NFT FC, a community of football fans using Web3 to revolutionise the future of football. For those who are new to NFT FC, how would you describe what it is? NFT FC is a decentralised sports agency and scouting platform that aims to support upcoming football players and enhance their relationship with supporters. We believe the strength and knowledge of a well-resourced community over any one individual is better suited to finding upcoming sport stars.

“We believe the strength and knowledge of a well-resourced community is better suited to finding upcoming sport stars than any one individual.”

Members are able to vote on the players they want us to support, prior to each season, via a vote2earn model. As a reward, we are going to give away a token to whoever partakes in the vote, and tokens can be used to earn exclusive benefits. It’s a fully decentralised platform that finds and supports athletes together.

Who makes up the current NFT FC community?

I’d say it’s a pretty healthy mix of football fans that are really into NFTs and then football fans in general, who are looking to get into NFTs, cryptocurrency and the blockchain in general.

Being a former professional player yourself, you have a personal connection to football, but what inspired you to create NFT FC?

Competition is huge to becoming a professional footballer. Most kids are turned away from a young age and they have a slim chance of making it. If you don’t know the right people and you’re not in a country where the infrastructure and the academies are promoting youth, it can be quite difficult. For example, I never had a big reputation in Australia, so for me it was hard. It can also often cost a lot to go overseas to try your luck at trials—an amount of money which many young players don’t have. When I went to England, I went before the season started during pre-season and spent a few months trialling at that club. For a young player especially, it’s hard to have that upfront money to support yourself while you’re on trial. Even for those that do have the potential, the barriers to becoming professional are big. They might be lucky and an agent will come along and support them. But because they’re so young and early on in their career, these agents have more leverage. They use that to their advantage, taking five to ten percent of their future salaries and sometimes even up to fifty. It’s been evident as the years go on and as more money is being made from football, that the power is slowly shifting to the bigger corporations and businessmen that are running football.

“At NFT FC, we’re trying to put the power back into the hands of players and fans, because they’re really the two driving forces of football.”

In this day and age, there are more ways that we can support these players without actually having to take away from their footballing salary. At NFT FC, we’re trying to put the power back into the hands of players and fans, because they’re really the two driving forces of football. NFT FC is all about shifting the power imbalance in sport from the institutions and corporations, back to the players and fans. Talk to us about some of the ways you are empowering that shift. Our focus is on supporting the players that are in academies and don’t necessarily have agents—or are in a position where they need an agent. The long-term goal is to create a platform where players can create their own profiles and our community can vote on the players they want us to support, having no need for a centralised team or scouts finding the player. We’ve supported one player already. His name is Rivendi Pierre-Louis and he lives in New York. One of the community members on NFT FC found his highlights on social media. We looked at them and saw the potential in him; his backstory resonated with what we are trying to build at NFT FC. He had a really rough upbringing. He lived in Haiti during the earthquakes and his whole family moved to America. We saw it as a perfect opportunity to support a player early on in the project and help give some exposure to his career. We sold about 370 NFTs and when he’s ready to go on trial and take a chance of becoming a professional footballer, that’s where we’ll step in and support him financially. The way we see supporting players is with the bills that they have to pay, the accommodation, the travel costs, and stuff like that. The goal of the project is very much to have all of the players who we support turn professional, because that’s where the benefit for the fans that buy into NFT FC comes from.

What are some of those benefits fans get in exchange for their player support?

NFT FC gives more access and benefits to the community that sports fans otherwise wouldn’t be able to get. The first one being the access to the early stages of the player’s career. As a football fan, the idea of finding a player in their early years and watching them grow into a successful player definitely resonates in games like FIFA’s ‘Career Mode’ and ‘Football Manager’. Imagine if you played a part in supporting Cristiano Ronaldo when he was at the football academy Sporting Lisbon and if, years later, while he’s at Manchester United, you got game tickets in exchange for the support you gave him in his early years.

How do those benefits for fans change as a player progresses throughout their career?

It’s not just a case of supporting these players early on and then following them on social media. We want to give more of an in-depth look at their player journey and how they’re going week to week. As part of the NFT FC community, you get access to the player’s journey later in their career as well with giveaways, signed jerseys, meetups, and calls when they make it professionally. The blockchain allows us to give that back to the fans. We can do that through token-gated channels in our Discord, which is where our community comes together and talks about the project and football in general.

“Imagine if you played a part in supporting Cristiano Ronaldo when he was at Sporting Lisbon and if, years later, while he’s at Manchester United, you got game tickets in exchange for the support you gave him in his early years.”

Beyond connecting players and fans, how else do you see NFT FC shaking up the industry?

For any sports player, a community of people looking to support you without any strings attached is going to be more interesting to you than an agent that’s just taking a large percentage of your salary. What we are trying to do goes bigger than just any one agent. We want to provide what these agents provide to players, but we can help players with other areas as well, like their merchandise and their personal brands. By collaborating with our players on their merchandise and creating a proper clothing brand, we can actually look to give a percentage of merchandise profits back to our stakeholders—the fans. For example, look at the music industry. People who like the music of up-and-coming musicians can now support them in return for their future salary. We are going to aim to do something similar with our merchandise. It’s not just all about one company profiting off of fan bases that already exist or trying to build a fanbase just so they can profit off it. It’s about actually giving the community a chance to make money as well. As a sports fan, is there anything else happening in the space right now that is really exciting to you? There are a few good projects now that are looking to collectively own sports teams. There’s a big one in basketball called Krause House where they’re looking to collectively own a basketball team. We’re talking about something that—for football fans, or sports fans in general—it would be in their wildest dreams: to own a football or sports team! Web3 technology is giving fans a chance to actually do that.

“For football fans, it would be in their wildest dreams to own a football or a sports team. Web3 technology is giving fans a chance to actually do that.”

Based on this trajectory, what does the future look like for NFT FC and football fans?

It’s going to put the power back in the hands of fans. Web3, and the rise of projects using blockchain, DOAs and NFTs, is actually giving the fans more of a voice. If we can give these fans more of a voice and more of a say in how the clubs are run and certain voting decisions, it is only going to benefit sport in the long-term. You’re going to see a lot of the smaller teams and smaller clubs first give more access and ownership to their fans. From just a pure fan perspective, it’s definitely an exciting future. It’s not necessarily about how much money we can make, but the impact we can make together. When projects do it well, there’s that big sense of community and they’re all in it together and they’re all going to win together.