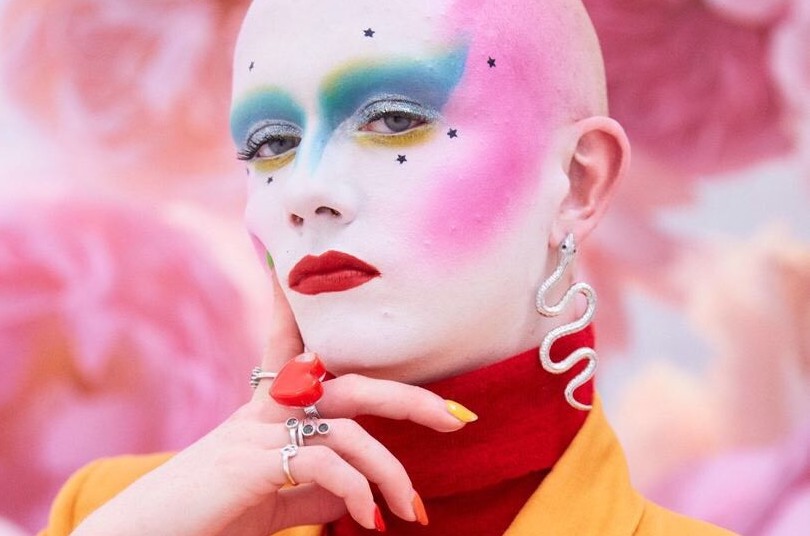 The Imperfect Power Of Labels

We sat down with Jamie Windust, a non-binary model, writer and speaker, to discuss how social media helped them find their identity, the limits and power of labels, and why the key to acceptance is more empathy.

Jamie Windust is an award-winning editor and writer, as well as a public speaker, model and the founder of FRUITCAKE magazine. Through all these touch points, Jamie is engaging with online and offline communities to breakdown societal barriers and shed light on the unsettling reality non-binary and trans people are still facing in society today. To learn more, follow Jamie on Instagram @jamiewindust.

Jamie, when did you first feel a sense that you wanted to push back on society’s constraints and explore who you are?

If you think about school, you’re in a uniform the first 15-16 years of your life, so you don’t necessarily always have time to explore fashion. That ability to explore for me once I finished was kind of the first step into realizing that I felt more comfortable presenting more femininely than I had prior.

“The way I found more language around non- binaryism and genderism was through social media.”

What was that period of time like for you? Did you have a way to express how you felt?

The way I found more language around non-binaryism and genderism was through social media. It wasn’t until about 18 that through it I found the people, the language, and was able to explore it and adopt that language and identity.

People often write-off social media as being a superficial space, but it sounds like that’s not the case for you?

No, I think one of the best messages that I’ve gotten was from someone who was from my hometown in Dorset, which is a very rural town. It was from a dad, and he was basically saying that both of his children were non-binary and that they were very thankful that I was doing what I was doing. He was very happy because he felt like he could learn from me, and that it then helped his relationship with his children.

Do you have to deal with a lot of haters online? How do you cope with them?

It’s really bizarre. I very rarely receive online abuse, and if I do, what tends to happen is that it’s very concentrated and it’s for a very short amount of time. In contrast, when I’ve got makeup and I’m presenting in a femme way in public, the reaction is like 99% negative. That’s why I value social media so much, because it’s like the other side of the coin.

You do a lot of public speaking and events around the UK and Europe. Are those conversations different from the ones you’re having online?

So sometimes when I go and do these talks and the topics of these conversations are fairly palatable, because I’m talking to a new audience, I can find it quite frustrating because I feel like these aren’t the conversations that we need to be having right now. We are just kind of like, ‘this is what trans is’ and ‘this is what non-binary is’. But sometimes it’s important to just say what’s really happening right now.

We are in a situation where there’s an obnoxious amount of transphobic press every single day. There’s a new alliance that’s just been formed called the LBG Alliance, that are basically trying to remove the T. So that’s been getting a lot of press, and it’s very difficult for trans people at the moment.

Let’s talk about labels. How is the non-binary label different from those that have come before it?

The counter argument to being non-binary is, ‘How can you label something that is essentially about taking away labels?’ But sometimes it’s about the intention and the context of that label. The label itself isn’t necessarily bad.

For example, if you look at society’s labels, those are often labels that are placed upon people and then create stereotypes and expectations. Whereas, the non-binary label flips that and allows us to identify ourself and create a community. It’s not a label that’s given to us, and then loaded with lots of expectations. It’s actually a label that frees us from the labels we’ve been given previously.

"If you look at society’s labels, those are often labels that are placed upon people and then create stereotypes and expectations."

What do you think the future holds? Will labels ever lose their meaning?

So I personally like the label ‘non-binary’, because it gives you a community. However, I do also think that the non-binary label is only necessary because people can’t fathom the notion of living label-free. You have to kind of appease people slightly by giving them a label so that they can at least know who you are and what you are. It’s like an evolution. I think that labels will continue to merge and change. Which is quite exciting actually, because it means that in future generations the language will continue to evolve.

You express optimism for future generations. What do you think is the key to getting more acceptance of different identities today?

Empathy. It’s the most important thing. People definitely rely on the trope of, ‘this is new. I have no idea what it means.’ But it’s not new, it’s just new to you. They need to come, de-center themselves from the conversation, take their fragility away and actually listen and take what we are saying as lived experience.

A lot of people today want to educate themselves for performative reasons, to make themselves look better. When I’ve worked with brands before and I’ve done talks, sometimes it’s very obvious that they are just doing it because they want to appear that they are woke.

We’ve seen a lot of brands engage with the LGBTQIA+ community poorly. In your view, how can they do better?

Yeah it’s frustrating. What I’ve started to do is make sure that the brands that I’m working with are either donating to charity or matching my fee to a charity, employing non-binary or trans people on set and briefing everyone about pronouns.

“People definitely rely on the trope of, ‘this is new. I have no idea what it means,’ but it’s not new, it’s just new to you.”

I work really hard to make sure that it’s accessible, but it’s difficult. Marginalized identities working with brands is only ever going to continue. But brands aren’t reaching out to anyone from the community until they want to put them in the ad. I would rather be reached out to chat about how behind the scenes can be better and how the structure of brand campaigns can be better, rather than trying to change the system as the face of it.