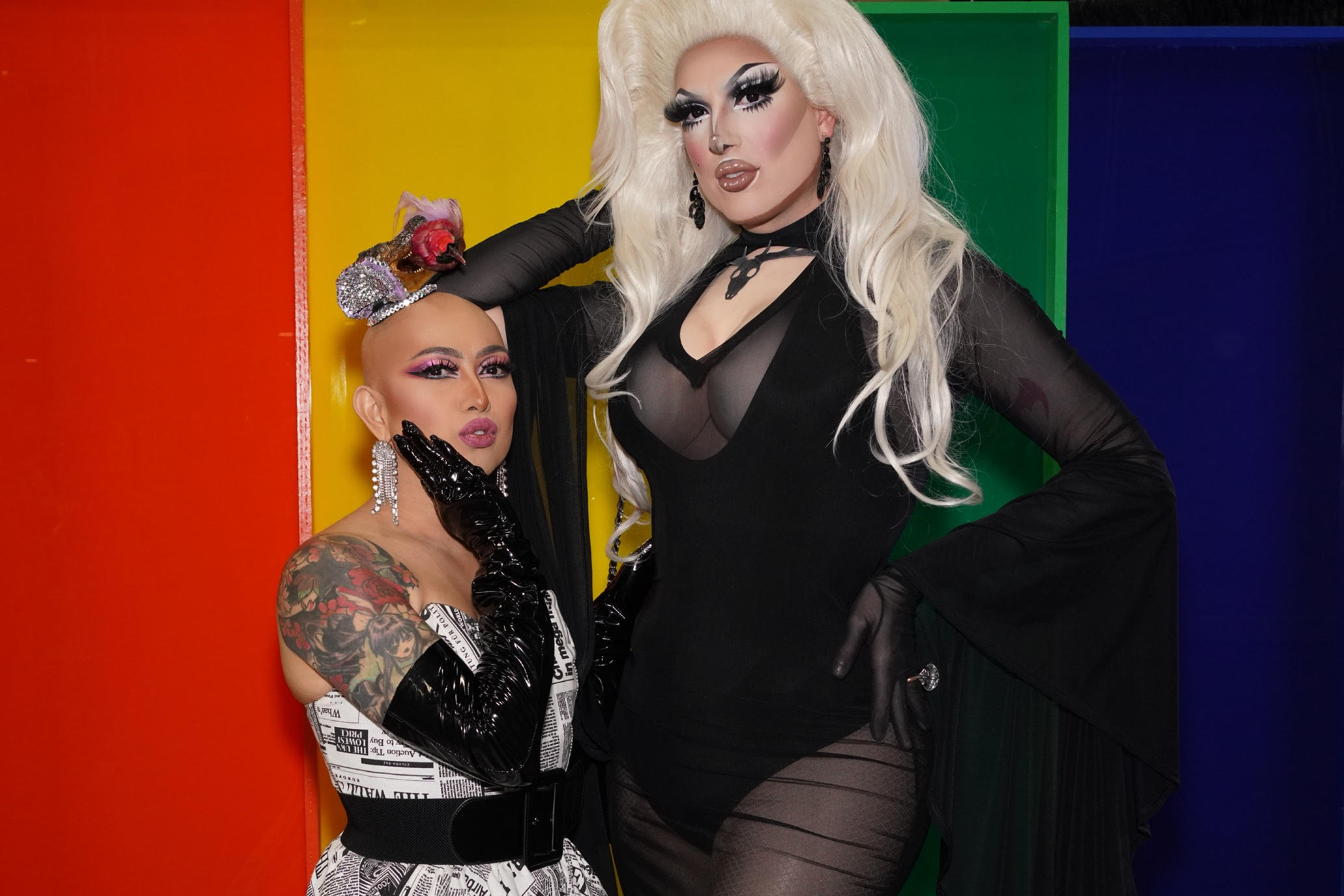 The Rise of ‘Niche’ Fandoms

We talked to Deere, a full-time streamer about building fanbases on Twitch, and why the future of gaming is going to be all about embracing ‘niche’ fandoms.

Deere is a full-time streamer on Twitch and the founder of the Twitch team ‘Stream Queens’. One of a growing number of creators on the platform who are carving out a space for drag culture within the gaming community, Deere sees thousands of fans tune into her streaming live, five days a week.

Today, gaming is your full-time job. Let’s rewind to when you were growing up. Has gaming always been a big part of your life?

I have loved gaming ever since I was a kid—I am absolutely a fan. I loved how, like movies, you could resonate with the characters and the stories, but also have input in how it played out by being active and engaging.

I’m not sure if the word “gamer” completely clicks for me, I feel like it has connotations with toxicity and competitive players, but essentially I am one.

What inspired you to bring the world of drag into the gaming space?

I have simultaneously loved fashion and makeup, and been effeminate, from a young age as well. So I wanted to imagine a way where my love for fashion, makeup, and gaming, could intersect. Initially, I struggled with how to merge them in ways other than cosplay.

“I wanted to imagine a way where my love for fashion, makeup, and gaming, could intersect.”

In 2016 I decided to create a Twitch channel specifically for combining drag and video games. I felt passionate about it, but I never really knew if it would be financially viable. Nobody was combining drag and playing video games at the time. Who knew if there was a market for it? I wasn’t sure if I’d ever have a single fan, let alone thousands!

Did your fanbase kick-off immediately, or did it take time to build up?

I had to work really hard to get where I’m at. At first I was paying out of pocket, like most drag artists and gamers do. After years of grinding, streaming as often as I could around my day job, and trying to establish myself as a live-streamer and entertainer, it started to pay off. Both with making friends and fans, but also in generating revenue to sustain it. Now it’s my full-time job, which is a dream come true.

For those who have never had the pleasure of watching you live-stream on Twitch, could you describe your gaming aesthetic?

“My name is DEERE, let’s play what you fear!” That’s my catchphrase. I’m fabulous and I like to think I look mystical. I appear in drag every stream —I think of it as an experience, just like when you go watch a drag show. At the same time as all the glamour and beauty, I like to play scary-themed video games to keep everyone on the edge of their seats.

I have a pretty calm demeanour and so I’m not reactive to the scares much at all. I’ve had so many people tell me that I make horror-genre games more accessible by presenting them in a calm tone. Fans on TikTok call me “the unbothered queen” because I don’t jump!

You’re on Twitch five days a week. What’s it like streaming to a live audience?

I love engaging and having conversations with fans in real-time, while getting to be comfortable in my own space. Like lots of queer people and gamers, I am more introverted, that’s why I love being able to put on my costume and play a more extroverted version of myself. My drag gives me that power.

The other beauty of live-streaming is that it’s all very in-the-moment. In live-streams many people filter in and out, so you get lots of different perspectives and thoughts. There’s this connection I feel when we all experience something together and then discuss it. It’s like when you watch a movie, you immediately want to talk about it with the friends you saw it with.

Who is your core fanbase on Twitch?

My fanbase is amazing and consists of so many different people across lots of different ages, backgrounds and walks of life. Most love drag, love horror, love both, are queer themselves, or allies to the queer community, and want that space to be themselves and to be authentic.

“People don’t have to question whether they are accepted in my space, and I’m so proud to be able to provide that for others.”

By doing drag on Twitch, I’m sending a signal to the queer community, as well as allies to the community, that I’m here and unapologetic about my queerness—and that being queer is intrinsic to my channel space. People don’t have to question whether they are accepted in my space, and I’m so proud to be able to provide that for others.

When you first started combining drag and gaming, you weren’t sure if there would be a big fanbase for it. Now you’ve not only seen it take off, but have helped grow the movement through a collective you founded called Stream Queens. Tell us about it!

Stream Queens is an all-drag troupe of content creators on Twitch. It’s like a hub for fans to discover and experience drag on the platform. Since we are international, there’s almost always someone live. It puts drag at the fingertips of the fans.

Drag is a tool that can unlock parts of your personality that you don’t always get to express, and bringing that to an online platform is so important to me. It makes drag more accessible because not everyone can go to the club to do or enjoy drag.

You’ve been gaming since you were a kid, and live-streaming on Twitch for over six years. How have you seen fan culture and engagement change over that time?

The world is so interactive these days. Everyone has a voice, and simultaneously, everyone’s a critic. When I was a kid, we were at the mercy of game developers because we couldn’t give any input. But nowadays, with social media and downloadable content for games, fans can have more input.

In 2019, so many fans demanded that a character named Mileena be added to Mortal Kombat 11—myself included—that the developers eventually added her. It was a huge win for the fans, and proof we have a say.

Fan mods are also one of the coolest things in the world. Mods are adjustments fans make to a game to change and add variety– most popularly, changing costumes of the characters. It allows creative fans to not only learn how games are made, but to also add to them themselves. The constant creativity is so fun and inspiring. The thing with fan modifications, unlike the actual companies that make the games, is that they’re ever-changing and evolving.

As fans gain more visibility and power, is gaming culture as a whole becoming more inclusive?

I feel like now there are so many ways to discover content creators to resonate with. There’s Twitch, Twitter, TikTok and more platforms that encourage and support establishing fandoms. In a general sense, the gaming industry is still shifting more and more. The days of always having a white dude as the main character are over. There’s something for everyone.

What worries me the most is that the generalised main audience is so resistant to change. What hasn’t changed is that there are still trolls, haters and naysayers in gaming culture.

I still see comments on Twitter and YouTube, especially regarding me, saying things like “who asked for this?” and “this doesn’t represent gamers”. Anyone that doesn’t fit the young, white, cis-men standard can unfortunately relate.

That’s what bothers me about the toxic homophobic fans that come across what I do. To them it’s a zero-sum game. Every single idea needs to appeal to them or it’s a “who is this for?” question. It never crosses their mind that maybe this isn’t their thing and maybe they’re not the target customer.

What will it take to get to a gaming environment where every type of fan feels welcome?

A cultural shift—instead of listening to the main audience, acknowledging all the parts of the audience individually. “Gamer” is not an absolute concept. Not everyone will always feel represented in every single project, and that’s okay. There’s nuance to gaming and so many different layers.

“Most people out there form a real connection with their fans by connecting with a niche.”

I just hope to see a time where we aren’t attacked for simply having different interests. Most people out there form a real and true connection with their fans by connecting with a niche. That’s how we feel seen, appreciated and celebrated.

When I was featured on Xbox’s Twitch channel last year for Pride, the biggest reaction was generally homophobic. However, I also had tons of individuals coming to me and noticing me for the first time, with supportive comments like “I never knew something like this existed and I love it!”. I want this for all niche interests in gaming.

How can we as fans of anything—gaming, music, fashion, sports—play a role in creating more positive fan environments?

I think the best thing we can do is just be there for the individuals, creators, artists, and collectives that bring us joy. Prop up and celebrate the ones that are doing the things we like to see. Be fans of the things that make the world a better place.

The more that we have people championing for diversity, demanding inclusion and celebrating it when it happens, we will continue moving forward.

If you want to see more of Deere, you can follow her on Instagram @deardeere or visit her Twitch channel at twitch.tv/deere